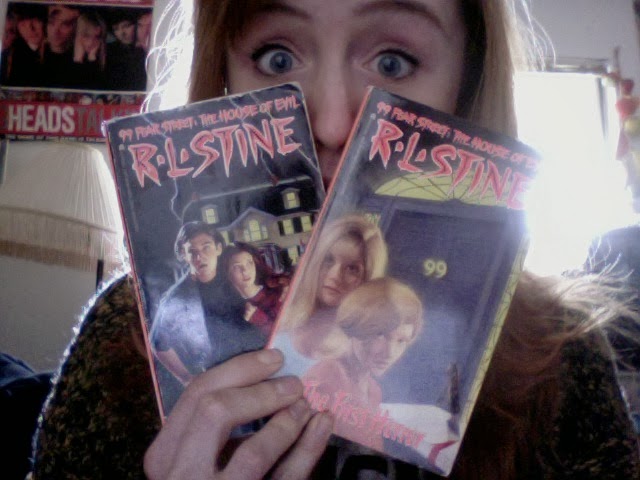 going to be lookin' real cool reading these babies at the coffee shop...the real horror is they charge me 60 cents for soymilk

Hello everyone! I intend to update this soon, going to begin doing more horror related commentary and reviews, and of course some goosebumps things. ;)
Posted by E. A. Slime at 10:35 AM No comments:

almost 40 bucks for those goodies...that's the scariest part about it

^^ selling all his stuff but it's local pickup only...in Alabama...crying inside....

Hello boils and ghouls! I hope you are having a lovely summer. I have been doing fine and plan to update this as soon as I can, once I return from the far nether regions of the universe.

^ If I had a dress made out of this material I would rock it so hard. So hard.

Did I scare you? I've been gone so long you probably thought I'd vacated for good. Ok, a little over a week isn't so very very long, it just seems that way. I had disappeared into a tenuous mental state known as "finals-itus" which includes symptoms like being constantly annoyed, going back and forth between hiding under the covers with a jar of peanut butter and freaking out in Starbucks over my illegible notes, and spending vast amounts of time with my horror books to calm my nerves. I've been reading a lot of Clive Barker lately which has been a somewhat welcomed contrast to my other childish pursuits. Anyway, I am working tomorrow as a mermaid at a fair, I have a wig and a tail and all. After that I'll finish my book synopsis and I'll bring peace to the world. xx 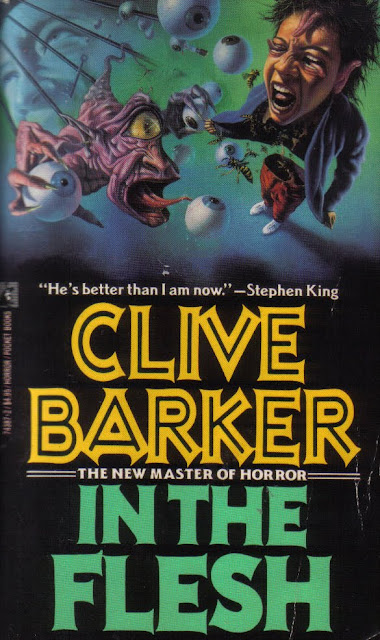 Same edition and everything. Love the cover art to death.

Teacher is an ALIEN

I'm currently reading this, but to make sure I keep track of everything I am posting my synopsis a I go.

Our story opens with picolo-playing wannabe actress Susan. It's just after Spring Break and she's currently watching this pimple Duncan bully this tall nerd named Peter. Much like me, Peter wants nothing out of life except to be left alone with his book. Susan considers jumping in and stopping the fight but decides her precious face might get bruised. She stands there and stares as Duncan calls Peter names and gets water on his jeans. However shit gets real when Duncan drops Peter's book in a puddle which you just do not do. Peter morphs into a bull and head-butts Duncan in the stomach and suddenly they are on each other like monkeys. A tall blonde man appears and breaks them apart by lifting the two of them up in the air. We can only assume this is Hulk Hogan. He tells them to knock it off and then goes back inside. No one seems to notice. Everyone runs to the school because class is going to begin and they all love their teacher so very, very much and it's so very, very nauseating. But instead of their teacher they see the same tall dude from outside Stacy sighs and says how handsome he is and secures her position as the weirdly-attracted-to-older-males-for-a-sixth-grader character. Turns out blondie's name is John Smith and with a name like that not only is he going to be the new teacher, but he's probably an alien.

This pisses Susan off. Like, immensely. Like she starts having this huge yelling match with the principal about where the hell her teacher went and who this new guy thinks he is. The principal tells her it's "private" and then asks her if she knows what private means which sounds like the beginning of a sexual harassment lawsuit. The principal leaves and Susan finally asks about the lousy class play she's been dying to do but Mr. Smith tells her to shut up because "they aren't here to play, they are here to WOOOOOOOOORKKKKK! *fire blazing in the background, giant tornadoes, etc.*" The class begins groaning about how dumb the new teacher is and suddenly it's too out of control and Mr. Smith gets pissy and starts whopping his ruler down all over the place. He then pulls out the school textbook, Rulers and Flags out of his ass and proceeds to tell everyone to read from it. Turns out he's completely lame and hates all music, going around and smashing radios all over the playground. Susan decides to take action by writing a note to her best friend (I'm guessing?) Stacy by saying what a creepazoid philistine (sounds like a good name for a band, "The Creepazoid Philistines!") Mr. Smith is. Unfortunately Susan doesn't understand the process of writing a note because instead of giving it to Stacy, she hands it in with her test. Like an idiot.

At recess she has a panic attack trying to find out how to get the note back. Stacy tells her she better think of something because he checks every single paper. Apparently it looks like he is sitting next to an axe murderer there are so many red marks on returned homework. Uhm, morbid simile alert. Anyway. She figures maybe she can sneak into his office before everyone else goes back inside by playing sick and asking to go to the nurse. She would ask to use the bathroom but Mr. Smith doesn't believe in bathrooms. She walks over and interrupts his daily 10-minute stare into the sun and tries to throw-up on his shoes, but of course she fails completely. He sends her to the nurse once everyone else is inside and she takes a nap. Lucky. My school nurse would bitch at you about how you weren't really sick and that you needed to grow the hell up or she was going to stab you and take a blood sample. And her office always smelled like cherry cough syrup. School ends and Susan has this brilliant idea to follow Mr. Smith home and I guess steal the note from him while he's in the shower or something...? She hides behind trashcans, in trees, all around trying to avoid being seen. Of course though, Peter (who else) spots her and tries to be nice only to have her metaphorically slap him in the face. I mean, she is running around hiding behind shit like a weirdo, he asks her what she's doing and she hisses at him to leave her ALONE, practically making him cry. God, Susan, traumatize the kid and render him incapable of intimacy with a woman in his later years, why don't you. She finally gets to her teacher's (or should I say THE ALIEN'S) house and is about to steal his briefcase he left on the porch when suddenly the sound of a cat being put in a blender fills the air. It's too much for Susan, she has to go inside and investigate. What.

She pushes the door open and sneaks in silently. Mr. Smith's living room is completely empty - it's like he's the 40 year old virgin trying to impress his date by hiding all his alien bits. Susan begins up the stairs where the sounds are coming from but stops and wonders what the hell she is doing. Funny, I was wondering the exact same thing. Apparently Susan is in fear of something bad happening to Mr. Smith and having to deal with that on her conscious so she keeps on truckin'. Suddenly, Susan remembers her worm heritage and begins slithering around on her belly down the upstairs hallway. She gets up the guts and peers around the first open door she comes to only to see Mr. Smith sitting at a makeup table. Apparently Mr. Smith really is gorgeous with "cheekbones to die for." Uhm, in sixth grade I would still runaway from guys who I thought were even remotely attractive. That or throw up. These sixth graders are mature. Those cheekbones, however, are fake, along with HIS ENTIRE FACE. Mr. Smith proceeds to rip off his handsome MASK (which Susan probably steals and forces her future sexual partners to wear so she can fulfill her weird repressed sexual fantasies about her teacher) and reveal A LIME GREEN FACE with ORANGE BUTTERFLY WING EYES. HOLY SHIT. "Mr. Smith" smiles and shows his purple teeth and massages his green skin like a freak while moaning in pleasure. He turns down a stereo - apparently the "cat in a blender" was really just his favorite album (bet his neighbors loved him) - and flips a switch to reveal a video conference in his mirror. He starts yapping to some other aliens whose voices sounded like snorts and farts to Susan. Mr. Smith's real name is Broxholm and he is planning to ABDUCT STUDENTS FROM THE CLASS TO STUDY. All this happens and of course Susan, being Susan, is just pissed that Mr. Smith called the English language "barbaric garble." Oh Susan, you and your completely distorted sense of priorities.

Mr. Smith talks to the alien on the screen for a while longer and then does what Susan assumes is laughing. Susan decides it's really time to get out of there and proceeds to slither backwards on her belly down the stairs and out of the house. She pauses on the porch and thinks if she should risk opening the briefcase to get her note. Apparently this is too risky - as opposed to sneaking inside the guy's house and spying on him talking with his alien coworkers - and she just runs straight home. Susan then talks about almost getting hit by a car as some unifying experience all readers are supposed to relate to. She plows her way through the disgusting mess that passes as her room and lays on her bed trying to think of what to do. She then asks the reader for advice which is pretty impractical, and besides I'm reading this to be entertained not to be some sixth grader's guidance counselor. Susan decides to manipulate Peter into helping her since he's a weakling and will most likely be swayed by her womanly charm. She eats dinner with her parents and for a moment forgets the alien problem when she sees broccoli is for dinner and quickly becomes enraged. Susan's mom tells her that her old teacher was a rude prude and that she is lucky to have the handsome Mr. Smith as a teacher. How awkward. Susan decides to ditch dinner and call Peter. She calls him something like 20 times but he doesn't answer. I don't think there is any mixed signals going on there - he's just not that into you, Susan. The next day at school Susan has a panic attack about her B.O. What if Mr. Smith could smell her inside his house? After the Pledge of Allegiance (to Zultron, Mr. Smith's home planet) Mr. Smith gives Susan back the note she drew. Now Susan thinks he's really weird. No, really, Susan, he's an ALIEN.
Posted by E. A. Slime at 11:13 AM No comments: